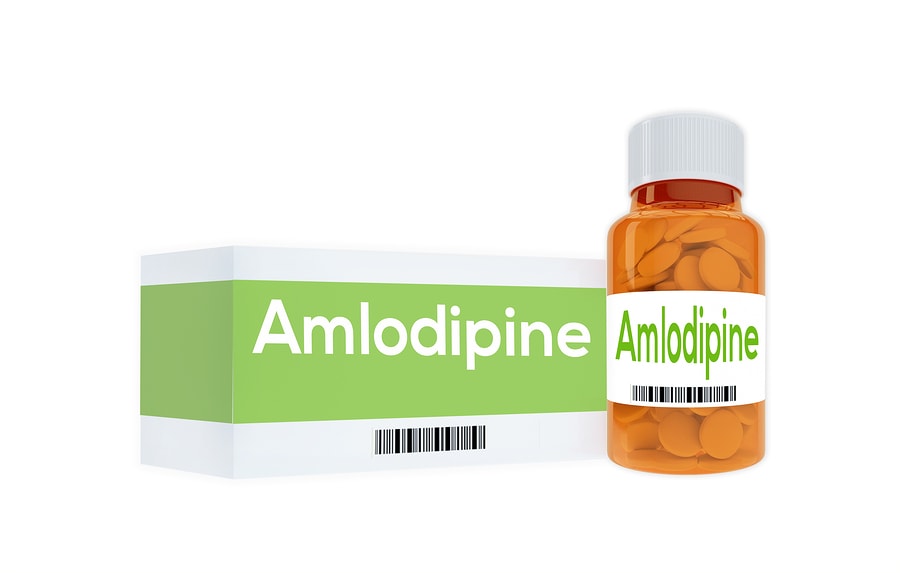 Amlodipine is one of the most commonly prescribed medications in the United States. It is typically used to treat high blood pressure and chest pain. Read on to learn about its uses, side effects, and dosage.

Amlodipine is a prescription medication that is commonly used to treat high blood pressure and chest pain (also referred to as angina). It is sold under the brand name Norvasc, among others.

Amlodipine belongs to a group of drugs called calcium channel blockers. As the name implies, these drugs primarily work by blocking calcium channels in the body.

Calcium channels control how blood vessels throughout the body tighten or relax (more calcium = more contraction). Amlodipine prevents blood vessels from contracting by blocking these channels from taking in more calcium. This causes the blood vessels to remain relaxed, which ultimately leads to lower blood pressure [1].

There is also evidence that amlodipine stimulates the release of nitric oxide in the blood vessels. Nitric oxide dilates blood vessels, which can also help lower blood pressure [2].

A systematic review of 18 clinical trials including data from 1,896 patients concluded that taking amlodipine leads to clinically significant reductions in blood pressure. Researchers also found there was no tolerance associated with long-term use, meaning amlodipine remained effective after years of use [4].

The same review also suggests that amlodipine is well tolerated and causes fewer side effects compared to some other common blood pressure medications, such as atenolol, hydrochlorothiazide, or verapamil [4].

Amlodipine has a relatively long half-life compared to similar drugs. This means that amlodipine is still effective when only taken once a day, which makes it easier to take than drugs that require multiple doses each day [5].

In addition, one study of 211 elderly patients found that amlodipine provides better blood pressure control than other similar drugs after 2 missed doses. Missed doses can be an issue in the elderly [6].

A randomized placebo-controlled study of 52 angina patients found that amlodipine greatly reduced the number of angina episodes after 4 weeks of daily treatment. The study also suggests that amlodipine is fairly safe, with swelling in the limbs (peripheral edema) as the only reported side effect [9].

In a randomized placebo-controlled trial of 825 patients with coronary artery disease, amlodipine was associated with fewer hospitalizations and heart surgeries over a 3-year period. However, amlodipine did not appear to affect the progression of the disease [10].

Amlodipine is sometimes used for several off-label conditions, which we’ll discuss in the following sections. If you are prescribed amlodipine, always take the medication as directed by your doctor.

Calcium channel blockers, including amlodipine, are sometimes used off-label to treat Raynaud syndrome, a condition where spasms in the blood vessels reduce blood flow. These episodes of reduced blood flow typically affect the fingers and toes and can cause pale skin and pain [11].

A meta-analysis of 18 clinical trials including 361 patients found that calcium channel blockers may reduce the frequency and severity of episodes associated with Raynaud syndrome [12].

Combining Amlodipine with Other Drugs

Amlodipine is commonly prescribed alongside other blood pressure-lowering medications in cases where one drug doesn’t provide adequate control. In fact, there are some combination drugs that contain amlodipine plus another medication in one pill. For example, Exforge is a drug that contains both amlodipine and valsartan.

According to research, combining amlodipine with certain other drugs may increase its effectiveness. Some examples include:

Generally speaking, amlodipine is well tolerated and has low rates of side effects.

For example, a meta-analysis of 16 studies involving 12,831 patients found that 15% of amlodipine users experienced side effects and only 3% of patients decided to stop taking amlodipine due to side effects [18].

Some common side effects include [19]:

Some serious side effects include [19]:

People who are sensitive or allergic to amlodipine or any of its components should avoid using this medication.

Due to a lack of clinical research, it’s unclear how amlodipine affects the fetus. Evidence from some animal studies suggests there may be some negative effects. Amlodipine should only be used during pregnancy if a doctor determines that the benefits outweigh risks [19].

The following drugs have been reported to interact with amlodipine. However, this is not a complete list, let your doctor know of all the medications you are currently taking to avoid any unexpected interactions.

A typical dose of amlodipine is generally between 5 to 10 mg per day, although this may vary between individuals and can only be determined by your prescribing doctor. Also note that your doctor may start you off on a small dose, and increase it gradually as needed.

Studies show that more than 90% of the drug is directly absorbed by the body and can stay in the bloodstream for up to 2 days or more [24].

6 Uses of Bromantane (Ladasten) + Side Effects