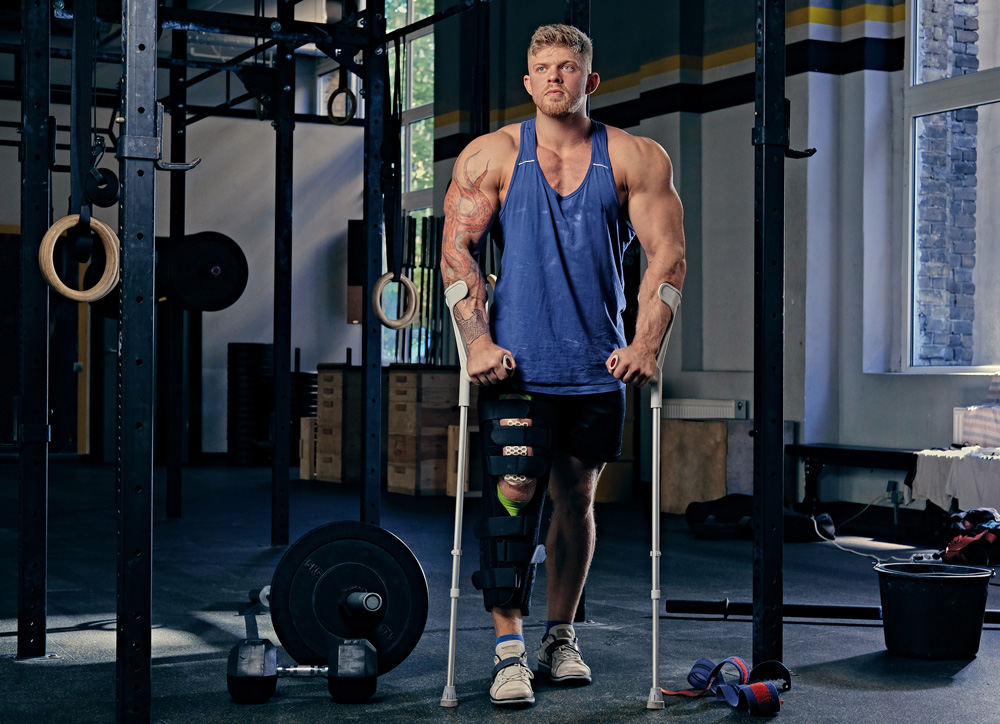 BPC 157 is a short peptide chain – essentially a piece of a protein. Its regenerative potential attracted scientists, who are starting to investigate if this peptide may promote muscle and wound healing and counteract the toxic effects of common painkillers. Read on to learn what the science does, and doesn’t, say about BPC 157.

BPC is a protein found in stomach acid and discovered in the ‘90s. BPC 157 is a 15-amino-acid-long fragment of this protein that is synthetically produced [1].

Some studies refer to BPC as “body protection compound,” hinting at its therapeutic potential. Scientists consider it a blueprint for an entirely new class of organ-protective/healing drugs, but research is still in the early stages [2, 1, 3].

BPC 157 likely promotes muscle and tendon healing by triggering the formation of new blood vessels – a process called angiogenesis (by increasing VEGF). This explains its regenerative potential and why it might also help heal wounds, cuts, and other types of damage in the body [4, 5].

By increasing new blood vessels, it might help with IBD, in which healing of the inflamed gut lining is slow [6].

Additionally, BPC 157 may promote wound and tendon healing by blocking the growth-inhibiting effects of a specific molecule (called 4‐hydroxynonenal) [7].

It might specifically help tendons heal by causing tendon cells to make more receptors for growth signaling molecules. This, in turn, allows the tendon cells to grow and move during injury repair, speeding up the process [8, 9].

It can also reduce inflammation, which is probably involved in its effects on wounds, ulcers, and tissue protection [10, 11].

BPC 157 can also influence the activity of neurotransmitters like serotonin and dopamine. In turn, it might help with depression, seizures, pain, and may even promote gut health. More research is needed to understand exactly how it works in the brain [12, 13, 14, 3].

Lastly, it can increase the production of nitric oxide (NO), which lowers blood pressure and helps to reduce the effects of high potassium levels [15, 16].

No clinical evidence supports the use of BPC 157 for any of the conditions listed in this section. Below is a summary of the existing animal and cell-based research, which should guide further investigational efforts. However, the studies listed should not be interpreted as supportive of any health benefit.

There are numerous references, both online and in published scientific studies, to BPC 157 being safe and/or effective in clinical trials of inflammatory bowel disease (IBD). However, results from such studies do not appear to have been published or peer-reviewed.

Some studies in humans with titles suggesting they tested IBD – falsely cited even in the scientific literature – were in fact performed in healthy people (see “Side Effects” section below) [6, 17, 18].

In rats with injuries in their Achilles tendons, injections with BPC 157 helped the tendons to heal almost completely, whereas control rats didn’t make full recoveries [7, 5, 20].

Similarly, peptide injections improved muscle healing for rats whose muscles had been cut or crushed. This effect even held true when rats were also treated with corticosteroids (steroid drugs like hydrocortisone), which can slow the healing process [21, 22, 23].

In mice with burns, creams containing BPC 157 accelerated the healing process, even in those simultaneously given corticosteroids [24, 25, 26].

BPC 157 also helped cuts heal in mice and in rats. It was effective even in diabetic rats; diabetes can make it harder for the body to heal wounds [27, 28].

Injections with the peptide also spurred the healing of broken bones in rabbits [29].

Protecting the Brain and Nervous System

Rats given BPC 157 injections after suffering traumatic brain injury had less brain damage, and rats injected with BPC 157 before brain injury were more likely to stay conscious and less likely to die [30].

In rats with nerve damage in their legs, BPC 157 injections helped the nerve cells regrow and heal [31].

It might also positively affect mood. In one study, BPC 157 injections decreased depression-like behavior in rats. This effect was comparable to that of conventional antidepressants [33].

Injections of BPC 157 helped to heal stomach ulcers in rats. It also protected the rats’ intestines from damage due to toxins like alcohol and helped heal gastrointestinal fistulas – abnormal openings in the digestive tract that cause fluids to leak [32, 34, 35, 36, 11, 37, 11].

In one study, BPC 157 injections reduced inflammation in rats with both stomach ulcers and arthritis [38].

In rats with an inflamed esophagus – the tube that goes from the throat to the stomach – the peptide also reduced inflammation [11].

Interestingly, BPC 157 might act on the gut-brain axis, helping to soothe the stress response “from the inside out” [3, 1].

NSAIDs (non-steroidal anti-inflammatory drugs) include over-the-counter (OTC) pain medications like aspirin and ibuprofen. Although generally safe if used as directed, these drugs can cause damage to organs like the stomach and liver if taken in high doses [39, 40].

It also decreased abnormal behavior in rats given amphetamines. This peptide might counteract the chemical imbalances amphetamines can trigger, especially on the dopamine system [43, 44].

BPC 157 by itself may be a mild painkiller. Rats injected with the peptide experienced less pain to pinching and similar unpleasant stimuli. Notably, this study was testing the effects of BPC 157 alone, not in combination with pain-reducing drugs (i.e. morphine, discussed above) [45].

Hyperkalemia is when blood potassium levels become too high. It’s usually the result of kidney disease, and it can cause muscle weakness, fatigue, irregular heart rhythms (arrhythmias), and even death [46].

In one study, untreated rats with hyperkalemia died within half an hour. But rats given injections of BPC 157, either before or immediately after getting hyperkalemia, survived and had fewer symptoms [16].

Keep in mind that BPC 157 is a practically unresearched substance. Due to the absence of clinical studies, its safety profile in humans is unknown. Talk to your doctor before supplementing with this peptide and report any side effects that you notice after taking it.

In one study, 32 healthy male volunteers were given BPC 157 enemas and reportedly had no notable adverse effects. However, important details like dosage aren’t readily available, and enemas are not the typical route of administration [17, 18].

Additionally, these results appear to have only been presented at conferences and have not yet gone through peer review [17, 18].

As there aren’t many solid scientific studies in humans it’s unclear exactly what the side effects of BPC 157 are. Animal studies generally report no obvious adverse reactions, though that doesn’t exclude the possibility of unnoticed effects or different effects in people [47].

Peptides used to increase muscle mass come with numerous unwanted effects. While there are no data to say for sure whether BPC 157 will cause the same, some of the side effects associated with using peptides include [48, 49, 50, 51, 52]:

Additionally, many peptides are known to interact with medications. As such, it’s always best to ask a doctor before taking any peptide [48+].

Growing new blood vessels is useful when it comes to injury repair, but it can be dangerous when it comes to cancer. While no studies suggest that BPC 157 increases the risk of cancer, its ability to increase blood vessel growth may feed existing tumors and cause them to spread [53].

On the other hand, BPC 157 may actually be beneficial for reducing muscle wasting in cancer patients. Research is currently underway [54].

BPC 157 can be taken orally or via injection, either subcutaneous (under the skin) or intramuscular (directly into the muscle).

Of course, injections of any substance carry their own risks and require medical supervision.

Because there are no peer-reviewed clinical trials testing BPC 157, there is no proven dose. Additionally, the FDA has neither approved this drug for any conditions nor established an official dose. Users and supplement manufacturers have established unofficial doses based on trial and error.

In rats and mice ingesting BPC 157 in their drinking water, the typical dosage ranged between 10 nanograms to 10 mcg (micrograms) per kg. The studied dosage for injections in rodents was within the same range [55, 43, 45, 16].

Remember that BPC 157 hasn’t been studied in humans. There is no way to know what the safe and effective dosage would be before clinical studies are carried out.

Additionally, many of the animal experiments were done using injections directly into the abdominal cavity, rather than under the skin or into the muscle.

First and foremost, all of the studies discussed above were performed in animal models and/or in cells in dishes. While such studies can be valuable, mice are different from humans, so it’s important not to assume that a treatment will have the same effect in both species.

Additionally, most of the studies were performed by the same few labs, with the same people listed as co-authors in many studies.

While it isn’t uncommon for a lab that finds an interesting avenue of research like BPC 157 to “take it and run with it,” this does increase the likelihood for bias, particularly when some of the researchers hold patents on the compounds being studied [56, 57].

The opinions expressed in this section are solely those of BPC 157 users, who may or may not have medical or scientific training. Their reviews do not represent the opinions of SelfHacked. SelfHacked does not endorse any specific product, service, or treatment, especially those that haven’t been studied in humans.

Generally, users of BPC 157 report positive effects. In professional muscle forums, users report that the peptide can help with healing injuries, soreness, inflammation, and tendonitis. One user said, “I give it all the glory.”

Some users have reported getting no noticeable benefit from using the peptide, and many expressed concern over the high cost and confusion at how to use it and what the dose should be. Some also reported unpleasant side effects, primarily constipation. Others were concerned about the long-term safety risks, given that this peptide has not been studied in humans.

Additionally, some users speculated that companies have mislabeled peptides that are cheaper to manufacture as BPC 157, urging caution for others looking to purchase it.

BPC 157 is a peptide that has been reported to have unique regenerative properties, from reducing inflammation to protecting organs from damage to healing tendons and wounds.

Studies in animal models show the promise of this peptide, but clinical studies are lacking.

What is Hydrochlorothiazide? + Uses, Mechanism & Dosage