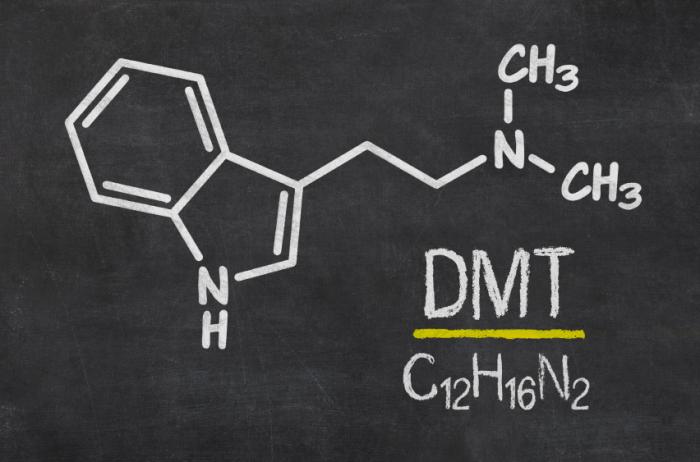 DMT is a powerful hallucinogenic and psychedelic compound that has been traditionally used by many cultures for ritual and medicinal purposes. Commonly referred to as “the spirit molecule,” it produces intense visual and auditory hallucinations as well as euphoria and anxiety. Read on to learn more about DMT, including its health risks and emerging research.

Disclaimer: DMT is classified as a Schedule I substance. This means that it is an illegal drug with high potential for harm and no known medical uses. We highly advise against the use of DMT until future studies determine its safety and efficacy in medically-supervised and safe settings. The only aim of this post is to outline research findings

DMT (N,N-Dimethyltryptamine) is a psychedelic compound belonging to the tryptamine family of molecules.

The possession and use of DMT are illegal. In most countries, including the United States, DMT is a Schedule I substance. Drugs under this classification are considered to have no accepted medical use, a lack of accepted safety, and a high potential for abuse.

DMT is naturally found in many plants and animals, including humans. It is found in trace amounts in the mammalian brain, lungs, and spinal cord and is a byproduct of normal metabolism. The function of this naturally occurring DMT is unclear [1, 2, 3].

According to research, DMT exerts its effects through several mechanisms, which are listed below.

DMT alone has little effect when consumed orally because it is quickly broken down by MAO enzymes in the body. MAO is an enzyme that is responsible for breaking down different neurotransmitters, such as dopamine and serotonin. For DMT to be orally active, it must be co-administered with an MAO inhibitor [10, 11].

Historically, South American tribes would prepare a brew called ayahuasca, a plant-based blend that contains DMT and an MAO-A inhibitor. The combined effect of both compounds allows for DMT to be absorbed into the bloodstream before being broken down [12].

Tribes consumed these drinks in spiritual and religious ceremonies. It induces euphoria and hallucinations that are believed to have mystical and healing powers [10].

DMT was first synthesized in 1931 by Canadian chemist Richard Manske and was first isolated in 1946 from Mimosa hostilis, a plant that was used by indigenous Brazilians in a sacred beverage called jurema [7].

Internationally, the trade of DMT is monitored closely and its use is restricted to scientific research and medical use. In the U.S., it is classified as a Schedule I drug, meaning it has no medical use and has a high potential for abuse.

However, certain religious groups in the U.S. have been granted exemptions and are allowed to import, brew, and distribute ayahuasca tea, which contains DMT [13].

How is DMT Different From Ayahuasca?

Ayahuasca is a brew made from several plants. It typically contains DMT as well as small compounds called β-carbolines, which inhibit the enzyme MAO-A. This enzyme is responsible for breaking down DMT and neurotransmitters (dopamine, serotonin, and noradrenaline) [14, 7].

By inhibiting MAO enzymes, ayahuasca may prolong the effects of DMT and modify feelings of euphoria and arousal [14, 7].

Ayahuasca is a 2 to 6-hour experience that slowly builds over time until a peak is reached, and the effects wear off slowly. Vaporized and intravenous DMT are short-lived experiences (15 min) in which effects peak quickly (within 2 minutes) and then quickly taper off [14, 15, 16].

Ayahuasca contains a mixture of plants that have other active compounds in addition to DMT, such as harmala alkaloids [14].

Because ayahuasca is brewed from different plants, drink composition may be different each time it is prepared, potentially leading to inconsistent effects [14, 17].

The effects of DMT on the body may include [18]:

Health Risks and Side Effects

Due to a lack of clinical research, the side effects and long-term health risks of DMT are unclear. Some potential side effects include [16, 19, 20, 21]:

There have been 3 reported cases in which patients suffered a long psychotic break that required hospitalization after experimenting with DMT. In all 3 cases, DMT was taken in combination with other substances and the patients had a history of psychotic symptoms [21, 22].

Certain psychedelic drugs, such as LSD and psilocybin have gained renewed interest for their potential to treat drug addictions, PTSD, and other mental disorders. However, out of all of these substances, DMT is one of the least researched [23, 24].

One issue is that research often focuses on ayahuasca instead of DMT alone. While ayahuasca does contain DMT, it also contains a number of other active compounds. It is unclear how much DMT contributes to the effects of ayahuasca, and there is very little research done on DMT alone [23, 24].

No clinical evidence supports the use of DMT for any of the conditions listed in this section. Below is a summary of the existing animal and cell-based research, which should guide further investigational efforts. However, the studies listed below should not be interpreted as supportive of any health benefit.

According to research, DMT may activate Sig-1R, a receptor that protects against cell death and inflammation. In a cell study, DMT activated Sig-1R and increased the survival of neurons and immune cells that were deprived of oxygen (hypoxia) [25, 8].

Sigma receptors (including Sig-1R) are found on many immune cells, suggesting they may play a role in immune function [26].