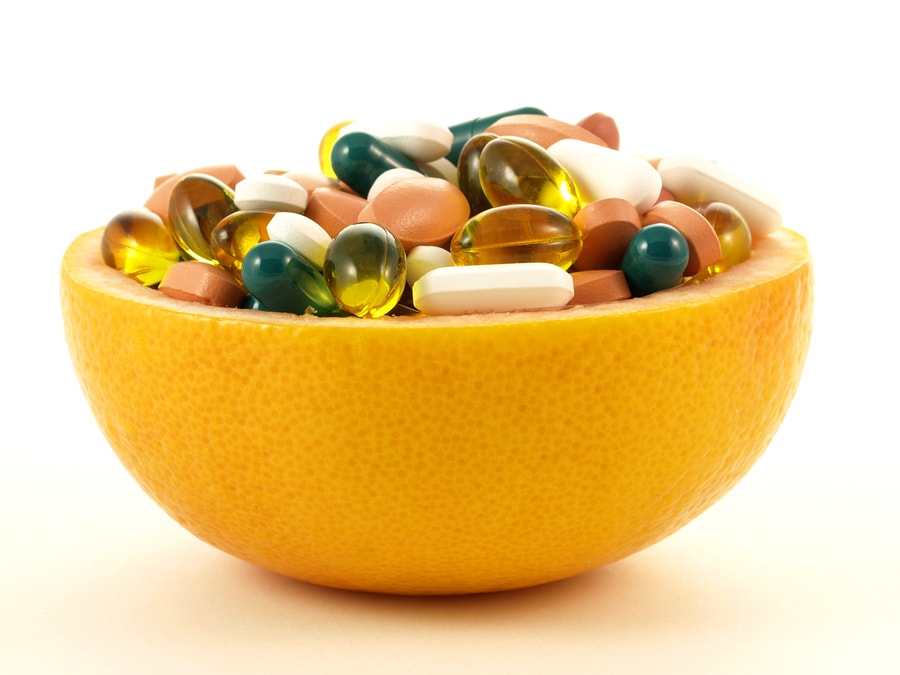 Grapefruit affects a great number of over-the-counter and prescription drugs. Read on to learn about why and how grapefruit messes with your medications, and what are the risks and side effects of these interactions.

In the early 1990s, scientists found that grapefruit juice could markedly increase the levels and action of drugs taken orally. This discovery led to further investigations of grapefruit’s constituents, drug interactions, and the mechanisms involved [1, 2].

Drugs that interact with one or more of grapefruit’s many biologically active substances are increasingly available. Many are frequently prescribed and essential for treating common medical conditions [3].

Of concern is that new drugs tend to be released before grapefruit interaction testing, putting patients at risk [4, 5, 6].

However, some scientists believe that only a few drugs can produce significant reactions (these include simvastatin, buspirone, felodipine, and possibly cyclosporine). This is because many of the interaction studies involve exposure to quantities of grapefruit juice far higher than that normally consumed [7].

They claim that the risk of grapefruit interactions with many other drugs, including quinine, quinidine, erythromycin, dextromethorphan, oxycodone, tolvaptan, nilotinib, and sunitinib, are clinically not relevant [8, 9].

Mechanisms of the “Grapefruit Effect”

Why and How Grapefruit Messes with Your Medications

There are 3 main ways in which grapefruit interacts with drugs; however, these can also be modified by genetics, and vary from person to person [10].

Furanocoumarins found in grapefruit block the CYP3A4 enzyme. This is an enzyme found in the small intestine and the liver that breaks down (metabolizes) drugs. It is responsible for processing about 50% of all prescribed drugs [11].

When grapefruit juice is consumed, CYP3A4‘s ability to break down the drug is decreased [12, 13].

This can result in:

Scientists think that grapefruit also likely blocks CYP3A5 with the same intensity as CYP3A4 (these enzymes have highly similar functions), but this hasn’t been properly studied [15].

P-glycoprotein pump or Pgp (MDR1, ABCB1) is found in the gut lining, where it pumps drugs back into the gut. It is also found in the liver, kidneys, blood-brain and blood-testis barrier. It has an important function in protecting our body from foreign chemicals, such as drugs and toxins.

Several studies suggest that grapefruit blocks the pump by both decreasing its production and blocking its function. This would increase the amount of the drug that makes it into the bloodstream and enhance the effect drugs can have on the body [16, 17].

However, other studies suggest that grapefruit juice may also activate the pump, which would mean a greater flow of the drug back into the gut and away from the blood [2, 18].

In addition, the interaction is more complex, because these effects can be offset/augmented by grapefruit also blocking the CYP3A enzymes [18].

So, it is not completely understood how grapefruit juice affects transport across the pump. In addition, a scientific review on the topic suggests that grapefruit might have a “minimal” effect on drug absorption in the body [7].

OATPs (organic anion transporting polypeptides) are cell transporters involved in the transport of a number of widely used drugs.

Grapefruit may block OATPs (including OATP1A2, OATP1B1, and OATP2B1), and thereby decrease the transport of the drug from the gut into the bloodstream. This decreases drug availability [19, 7].

Grapefruit Compounds Responsible for these Effects

Grapefruit comes in many varieties with different levels of active components depending on the variety, maturity, origin of the fruit, local climate conditions, and the manufacturing process. No single component accounts for all observed interactions [20].

The compounds thought to be responsible for interfering with drugs include [2]:

Several studies have shown DHB (6′,7′-dihydroxybergamottin) and to an extent, bergamottin to be important contributors to the grapefruit juice effect (blocking CYP3A enzymes) [21, 22, 23].

On the other hand, the flavonoids, especially naringin, are the grapefruit constituents responsible for clinically significant OATP inhibition. In contrast to CYP3A, OATP inhibition is short-lived, and the reaction can be avoided by taking the drug and grapefruit at different times [7].

The complex chemistry of grapefruit juice makes its use in drug interaction studies challenging. The concentrations of bergamottin, DHB, and naringin that produce adverse effects are often not reported [7, 24].

There is some effort to produce grapefruit juice without furanocoumarins by removing these via methods such as filtration, heating, or UV exposure. This would potentially create “interaction-free” grapefruit juice that doesn’t interact with drugs. The question, however, is whether this juice would provide the same health benefits as the unprocessed one [7].

What Determines Which Drugs Are Affected?

The interaction between medications and grapefruit is drug-specific. Each drug is broken down and passes through the body in different ways.

What Determines the Magnitude of the Interaction?

Generally speaking, a grapefruit-drug interaction is likely to be of clinical importance if the drug has a narrow therapeutic range, or when the drug’s movement through the body is dramatically altered by grapefruit [7].

Why Is Grapefruit-Drug Interaction still a Problem?

Unless health professionals are aware of the recent addition of grapefruit to a patient’s diet, they may not investigate grapefruit as a cause of a negative drug reaction. Also, patients may not volunteer this information and many of them don’t realize it is of importance [3].

That is why some scientists think that current data does not provide an absolute or even approximate number of the true incidence of grapefruit-drug interactions [3].

Who is at Higher Risk of Grapefruit-Drug Interactions?

Older people are especially at risk for grapefruit-drug interactions because [25, 26, 27]:

Also at risk are people with certain genetic differences that impact the production of the enzymes CYP3A4/CYP3A5 [2, 28, 15].

Drugs that Interact with Grapefruit

Below is a list of drugs that interact with grapefruit, based on data gathered from 2012 through 2013. Many new drugs not listed will also produce a similar risk. Also, drugs have different trade names in different countries [29, 3].

Grapefruit DECREASES the Effects of These Drugs

Grapefruit INCREASES the Effects of These Drugs

Statins and other Cholesterol-lowering Drugs

Risks and Side Effects

The risks of taking grapefruit products with certain drugs include:

Torsade de pointes is a particular type of abnormally fast heart rhythm, with the risk of sudden death. It occurs when the measured interval between two parts of the heartbeat is excessively prolonged. The effect of the antiarrhythmic drug amiodarone and its active chemical dronedarone, when taken with grapefruit juice, is significantly increased compared to when taken with water. This can lead to dangerous variations in the heartbeat [31, 111, 3].

Torsade de pointes can also occur with certain anticancer drugs, such as nilotinib and sunitinib [55, 52].

Rhabdomyolysis occurs when the concentration of some drugs becomes too high. The drug-induced toxicity damages muscles, causing the release of large quantities of muscle proteins into the blood and acute kidney failure. Statins can produce this effect at high concentrations [112].

Rhabdomyolysis has been reported with grapefruit ingested in usual amount [113, 114, 85].

Nephrotoxicity is damage to the kidneys caused by drugs. It can occur with high levels of drugs that prevent organ rejection after transplant (cyclosporine and tacrolimus). Both of these drugs have a narrow beneficial range below which they lack sufficient effect and above which they cause toxicity. Concentrations of these drugs can increase by up to 600% when taken with grapefruit [115, 3].

A large study of 50,000 women showed an increased risk of developing breast cancer when estrogens were taken with grapefruit juice [116].

However, a follow-up study with over 114,500 women found no such association. They adjusted their results for reproductive history, body mass index, energy intake, and alcohol intake [117].