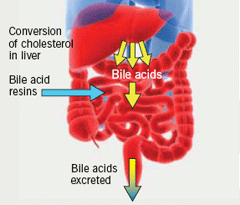 Cholestyramine (CSM) is a bile acid sequestrant used to lower cholesterol and to relieve itching associated with liver disease. Its other uses remain unproven. Read this post to learn about its evidence-based uses and side effects.

Cholestyramine is an oral medication used as add-on therapy to lower high cholesterol, along with diet and lifestyle changes. It is also used to reduce itching in people with blocked bile ducts (primary biliary obstruction), a type of liver disease.

These are the only proven, safe, and well-researched uses of cholestyramine.

Nonetheless, some doctors prescribe this drug off-label for Chronic Inflammatory Response Syndrome (CIRS) and other “biotoxin-related illness.” This practice is not evidence-based and its safety is unknown.

Additionally, most doctors do not accept that there is any causal connection between mold exposure and any health issue. In light of this, mold illness and CIRS are considered to be highly controversial, pseudo diagnoses. Similarly, what people subjectively describe as CIRS has been linked to psychological disorders [1, 2, 3, 4].

Cholestyramine (CSM) is a bile acid sequestrant. It binds to bile acids in the intestine, which prevents them from being reabsorbed into the body. Thus, the body eliminates more bile acids, along with cholestyramine, with the stool. To compensate, the liver turns more cholesterol to bile acids, which lowers cholesterol levels in the blood.

The only indications for cholestyramine are as an add-on therapy in people with high cholesterol and for the relief of itching due to certain forms of liver disease (partial biliary obstruction).

Consult your doctor about any medication-related questions you may have as well as to learn more about how to properly use cholestyramine for these indications.

Cholestyramine is used as an add-on therapy to lower high cholesterol levels in the blood. Lowering cholesterol helps decrease the risk of strokes and heart attacks.

2) Itching due to Liver Disease

People with liver and biliary disease often experience itching. This symptom is thought to be a result of the accumulation of bile acids in the skin due to the inability of the liver or bile ducts to remove bile acids as well as they should [5].

By binding to bile acids in the intestines, cholestyramine prevents their absorption and lowers their blood levels. This provides symptomatic relief for people with itching due to bile and liver disease.

Additionally, one paper suggested that cholestyramine ointments might reduce diaper rashes in babies, but large-scale trials are lacking to back up its use for this purpose [6].

Bile acid malabsorption (BAM) is a relatively common cause of chronic diarrhea. According to some estimates, about one in every 20 people in the general population suffers from BAM [7].

On the other hand, BAM is much more common in people with Crohn’s disease and diarrhea-predominant irritable bowel syndrome [7].

Certain stool analyses can help doctors determine a patient’s level of bile acid production and whether they would benefit from cholestyramine. According to some evidence, a trial of cholestyramine is a less time-consuming and expensive practice [7].

An estimated 70% to 96% of chronic diarrhea patients with BAM respond to short-course cholestyramine [7].

4) Some Forms of Drug Overdose

Cholestyramine binds some drugs in the intestine, which prevents their absorption and speeds up their elimination. It is sometimes used in cases of drug overdose.

For example, digoxin is a drug used to treat heart failure. Toxic levels of digoxin can cause serious health problems, and cholestyramine will reduce levels and decrease the side effects of digoxin [8].

Nonetheless, more specific antidotes have been developed for various types of drug overdose.

Clostridium difficile (C. diff) infections are a major cause of infectious diarrhea in hospitals. The typical treatment for more severe cases involves the antibiotics vancomycin and metronidazole. Unfortunately, one in five patients relapses after the antibiotics are continued. A small number continue relapsing after several antibiotic courses [9].

One study suggests that adding cholestyramine or Saccharomyces boulardii to longer vancomycin treatment in these multiple-relapse patients may be beneficial. But large trials are needed to confirm the effectiveness of this combination [9].

The following off-label uses are only supported by limited, low-quality clinical studies. There is insufficient evidence to support the use of cholestyramine for any of the below listed uses.

In one trial, cholestyramine added to mesalazine (an NSAID) treatment reduced symptoms of collagenous colitis, a type of chronic inflammatory disease of the colon. Large-scale trials are needed [11].

According to limited evidence, cholestyramine coupled with flunarizine (a calcium antagonist, not available in the US) and pentoxifylline (a vasodilator and anti-inflammatory) may help treat spur cell anemia, which is a lack of red blood cells due to alcoholism [12].

This combined treatment helped patients recover from anemia and reduced the number of spur cells in the body in one trial. Further research is needed before we can draw any conclusions about this potential use [12].

Gallbladder stasis or blocked gallbladder is frequent in people who are obese, and it may contribute to their increased risk for gallstones. Some studies suggest that cholestyramine increases emptying of the gallbladder, which might prevent gallstones in overweight people. Additional studies are warranted [13].

Limited evidence suggests that cholestyramine may reduce some symptoms of hyperthyroidism, but safety and efficacy data are lacking [15].

Side Effects & Safety of Cholestyramine

This list does not cover all possible side effects. Contact your doctor or pharmacist if you notice any other side effects.

The following side effects of cholestyramine have been reported:

Mix each 9 g dose of cholestyramine for oral suspension with 2 to 6 ounces of water. Make sure to drink enough fluids when taking this medication and aim to maintain good oral hygiene.

Limited evidence suggests that cholestyramine may lower the levels of Vitamin D and K. In some cases, patients were Vitamin K deficient after long-term usage of cholestyramine [17, 18].

In rats, cholestyramine reduced Magnesium, Iron, and Zinc levels. These effects have not been reported in humans [19].

Consult your doctor if you are concerned about nutrient deficiency and are considering vitamin, mineral, or any other supplements.

In one study on healthy adults, a daily dose of 8 g of cholestyramine slightly increased levels of alanine aminotransferase, a marker of liver damage. However, these elevations were considered to be benign and clinically irrelevant. Additional large-scale safety studies focusing on markers of liver health might be warranted [20].

Cholestyramine may delay or decrease the absorption of the following drugs [22]: