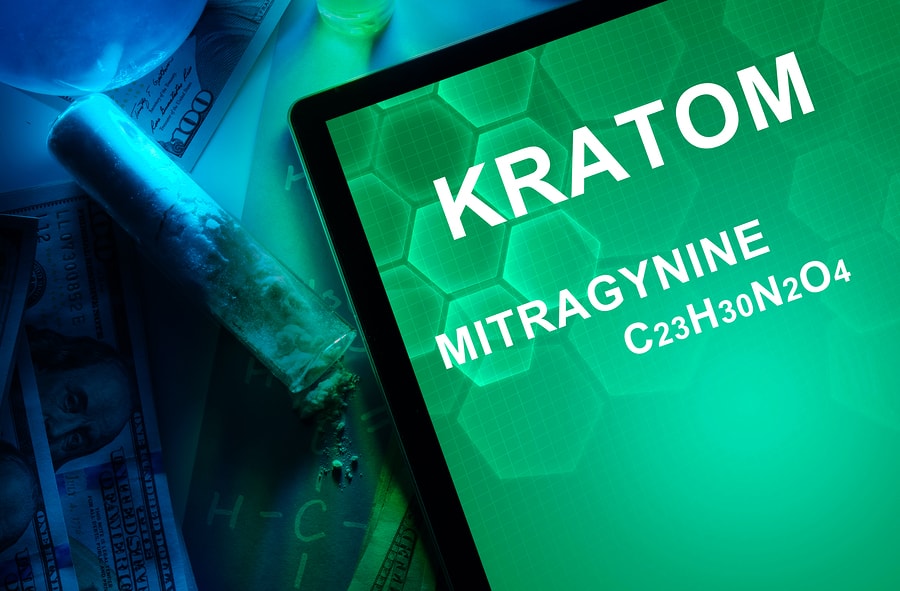 Kratom, the controversial plant consumed for centuries for its stimulant properties, has recently been the topic of an FDA public health advisory addressing the deadly risks of its use. Why do people use kratom, and what are the specific dangers? Read on to learn more.x`

Disclaimer: We strongly recommend against taking kratom for any reason. Some of our readers who were already taking the drug requested that we commission a post on it, and we are simply providing information that is available in the scientific and clinical literature.

Please discuss your medications with your doctor.

You may know Kratom by its street names: Thang, Kakuam, Thom, Ketum, Biak-Biak, and Krypton (this one also contains O-Desmethyltramadol).

Kratom (Mitragyna speciosa) is an evergreen deciduous tree native to Southeast Asia. It is part of the coffee (Rubiaceae) family [1].

Kratom leaves have been used for centuries by the native people of Southeast Asia for their stimulant properties. Kratom reportedly reduces fatigue during manual labor and extreme heat. It may also treat muscle pain, gut infection, coughing, and diarrhea [3, 4, 5, 6].

In addition, it has been used for self-treatment of opiate addiction [7].

However, kratom has since transitioned to a recreational drug in both Southeast Asian and Western contexts [9].

Kratom is widely available via online stores in the form of a powder, extract, pill, or dried leaves. A cross-sectional survey in the United States identified the most commonly consumed form to be kratom powder with a beverage or food [10, 11].

Kratom is currently legal in the United States, however, the FDA released an advisory regarding the associated deadly risks in November 2017 and an additional warning about unapproved kratom products in June 2019 [12, 13].

What Are the Effects of Kratom?

Users report that euphoria can be achieved within 5 to 10 minutes of chewing the leaves and can last up to 1 hour [14, 7].

Kratom functions as a depressant with reports of “morphine-like” sedation and nausea at high doses and a “cocaine-like” stimulant at low doses [14].

Over 25 compounds have been identified in kratom extract. The active ingredients are mitragynine and 7-hydroxymitragynine [15, 16].

Mitragynine is the most abundant alkaloid and a partial opioid receptor activator (agonist). It targets a portion of the brain that responds to opioids, which is why it has similar effects to morphine [17, 14, 18].

The minor alkaloid, 7-hydroxymitragynine, is considered to be more potent than morphine [14, 18].

The activity of these receptors improves mood and lowers anxiety.

Changes in the body in response to these alkaloids include secretion of stomach acid and inhibition of contraction of a portion of the small intestine (ileum) and male reproductive system (vas deferens) [23, 24].

Why do People Take Kratom?

Remember that the FDA has issued multiple warnings about the dangers of kratom, including the risk of developing an addiction, similar to other drugs that activate the opioid receptors. The following effects have been observed in clinical trials, but at the potential cost of addiction, liver damage, and cognitive impairment.

In an online survey of kratom users, pain relief was the most reported beneficial effect of this plant [25].

Although no well-controlled human studies have been published, animal studies show that kratom extract improves various forms of pain. Mitragynine and 7-hydroxymitragynine relieved and blocked pain (they were analgesic and anti-nociceptive) in animals, with opioid-like effects observed in organ samples [26, 27].

High doses of kratom in rats reduce muscle and nerve function by blocking the exposed sciatic nerve response to electrical stimulation at the nerve-muscle junction [30, 15].

In a 2016 online sectional survey in the US, 66% of the participants used kratom for mental conditions including depression and anxiety [25].

Both low and high doses of mitragynine in rats effectively reduced anxiety [32].

Antidepressant-like effects are seen in numerous animal models of depression. These are primarily based on kratom’s action on opioid receptors [33, 34, 35].

Both animal and cell-based experiments show mitragynine also interacting with adrenergic and serotonergic receptors. These non-opioid receptors are common targets of antidepressant drugs and may contribute to the antidepressant effects of kratom [36].

No well-controlled human clinical trials have confirmed these findings.

In a cross-sectional survey of 293 northern Malaysian users, kratom was used to enhance physical energy by 27 to 28% of medium- and long-term users [37].

Many of these people used kratom to enhance work performance and consumed it as an “energy-boosting drink” [38].

In addition, an online survey identified increased energy as one of the most reported benefits of the substance [25].

According to a review of animal and human studies, kratom causes stimulant effects and holds off fatigue [39].

In an analysis of 120 journal articles ranging from animal to human studies, euphoria was one of kratom’s more reported effects [39].

However, only 6% to 12% of 136 active users in northern Malaysia reported euphoria as a reason they use kratom [40].

Euphoria is also connected to kratom’s addiction potential, as it is presumably caused by the activation of opioid receptors [41].

In a case report, a 44-year-old patient required a dose increase from 4 g to 8 g twice daily to experience the desired euphoria [7].

Kratom has been used as an opium substitute since the 19th century [42].

Opioid abusers sometimes resort to kratom for self-treatment of addiction and to relieve symptoms of withdrawal. For now, kratom is easy to buy, requires no medical prescription, and is less expensive than other opioid replacement treatments (e.g., buprenorphine, methadone) [14].

However, kratom itself presents a risk of addiction [43].

Users report feelings of relaxation and tiredness after consumption of a higher dose of kratom [44].

Mitragynine, the main active ingredient of kratom, decreased inflammation (by inhibiting the bacterial endotoxin/LPS-stimulated production of COX-2 and PGE2) in response to an immune stimulant [29, 46].

The FDA has released multiple specific safety warnings about kratom. In 2017, the FDA warned of acute toxic effects and calls to poison control associated with kratom use. In 2019, it warned companies producing kratom products for opioid withdrawal that these products were illegally marketed, unapproved, and likely dangerous. The FDA’s overall policy on kratom is that it presents risks of dependence, addiction, and abuse [47, 13, 43].

Although no well-controlled human studies have been published, animal studies show that chronic mitragynine treatment impairs learning and memory [48, 49].

In mice and rat models, mitragynine caused cognitive impairments. It hindered the ability to avoid a response that routinely leads to punishment (passive avoidance learning), and memory maintenance and retrieval [32].

In a case report, a young male kratom user developed jaundice and pruritus and had alkaloids in his urine sample after 2 weeks of use. These clinical signs indicate an inability of the liver to cleanse the body of the alkaloids and correlate with liver damage (intrahepatic cholestasis) [44].

Kratom use may be linked to cholestatic liver injury. In another case report, a middle-aged man who used a low dose of kratom for 3 months developed jaundice and liver abnormalities. Interestingly, his jaundice reversed upon withdrawal and reappeared upon resuming the consumption of kratom [50].

Mitragynine inhibits three liver cytochrome P450 enzymes (CYP2C9, CYP2D6, and CYP3A4) necessary for the breakdown of drugs and toxins. Without these, the liver’s alternate detoxification pathways can become overtaxed [51].

Reported side effects of kratom use include:

With the exception of diarrhea, an online survey of American users shows that all negative effects are dose-dependent, with higher doses producing more side effects than lower doses [25].

Risk of Kratom Addiction and Withdrawal

The euphoric feeling of being “high” can urge users to continuously consume kratom, leading to potential addiction [3, 54, 40].

In animal studies where kratom was administered for 5 days or longer, the animals developed a physical dependence – addiction. Withdrawal symptoms similar to opioid withdrawal were also observed [14, 26, 55].

Animals withdrawing from chronic mitragynine treatment had symptoms of opioid-like withdrawal, including movement hypersensitivity to other drugs or stimulation, and enhanced anxiety [32].

Severe human side effects associated with withdrawal may occur with chronic use. These side effects include aggression, hostility, anxiety, loss of libido, muscle aches, severe weight loss, and insomnia [7, 38].

Confusion and delusion were also reported [56].

Hyperpigmentation of the face and cheeks can occur after chronic kratom use because mitragynine can increase the melanocyte-stimulating substance, melanin [57].

There is no safe dosage for kratom, since kratom is an unapproved new drug that poses a significant safety risk. Below is a summary of the dosages used in scientific research, outlined for informational purposes. We strongly recommend against using kratom for any reason.

According to users, kratom effects are dose-dependent [16, 58]:

There is not sufficient safety data to determine the relative dangers of these doses. Low doses may present as much of a risk of dependence as high doses.

Can You Overdose on Kratom?

Kratom is on the DEA’s list of drugs of concern due to its potential toxicity and risk of overdose. An increase from 26 to 263 calls to poison centers associated with kratom use occurred between 2010 and 2015, with more than 40% of the calls ranked as serious or life-threatening cases [59, 60, 61].

Signs and symptoms of kratom overdose include [60, 62]:

The risk of overdose is increased with co-consumption of alcohol and other drugs (ex.: benzodiazepines, narcotics) [63].

Additional substances were present in the blood and urine samples and contributed to the deaths of 9 kratom overdose victims in a study between 2009 and 2010 [18].

However, two rat studies that orally administered a high dose of 200 mg/kg of kratom extract resulted in death [65, 66].

There is potential for drug interaction when mitragynine and 7-hydroxymitragynine are co-administered with drugs that get broken down by P-glycoprotein (e.g. colchicine, tacrolimus, and quinidine) or UG72B7 [67, 68].

These drug interactions can result in a build-up of the active constituents of kratom and other drugs, contributing to liver damage [70].

This is not necessarily a complete list of potential interactions between kratom and other drugs. To avoid unexpected interactions, we strongly recommend against using kratom.

Kratom leaves and smaller stems can be consumed fresh by chewing, or dried and smoked, steeped in water, prepared as an extract or a crushed powder in the form of an herbal supplement [71].

Originating in Bali, the red variety is most often used to alleviate pain, while white-veined varieties originating from Malaysia are reported to generate a strong stimulant effect.

The chemically-based potency of different variants is unknown, given that they are not regulated by the FDA; thus, they are not well-documented.

User experiences from online blogs note that kratom provided pain relief without “feeling spacey,” and helped maintain a clear head for a few hours. If too large a dose is taken, nausea, vomiting, and sleepiness were commonly reported side effects.

Negative response themes were also noted, such as vomiting and kratom dependency [31].

What Is Salvia Divinorum? Effects, Safety, and Legality